Leon Clarance is a seasoned film and TV producer and talent manager at Los Angeles based Zero Gravity Management. With over a decade’s experience in film production and financing, he has executed in excess of £2.7 Billion worth of media transactions ranging from major US studio productions such as Pirates of the Caribbean 3 and The Bourne Ultimatum to small charming Indies like The Boy Downstairs and Steel Country. Leon’s unique skillset places him at the centre of both creative and financial decision making aspects of productions whilst understanding the requirements of sophisticated investors for whom investment in media is serious business.

Leon went on to co-found Georgeville Television, a US-based television studio formed with Marc Rosen. Georgeville secured 4 straight to series orders in its first 6 months of operation and went on to produce Sense8 for NETFLIX.

Leon is a member of The Producers Guild of America and is also the founder of Motion Picture Capital Limited.

Simon began his career as a commercials director, winning several awards including the ad industry’s prestigious D&AD award. While working on numerous international advertising campaigns and short films he directed nine television shows for television for Channel 4 through the award-winning Kudos Productions, including American Cops by James Ellroy, and writer Will Self (Plastic Surgery).

Zara Ballantyne-Grove, previously a member of the advisory committee of the British Independent Film Awards (BIFA), is currently the COO of Upbeat Productions, a video production and software development company that creates engaging content and bespoke technology, where she has produced award-winning short films which have screened at festivals around the world. Major festival screenings include Raindance Film Festival and London Short Film Festival.

Internationally award-winning director, Marc Price, is the writer and director of NIGHTSHOOTERS and Dune Drifter, a sci-fi action feature having its premiere at Frightfest before being released this year. Marc’s debut feature, COLIN, won six international film awards including Best Feature at Raindance and a nomination at the BIFA awards for best feature. Screening at the Cannes Film Festival, Frightfest and Sitges, it has been released theatrically in Japan, North America, Canada, Australia, Germany and UK. COLIN also received a wealth of critical acclaim across the world, with Martin Scorsese describing it as, “Savage, with an energy that takes the zombie idea to another level. Really interesting filmmaking. Disturbing.”

Marc’s second feature, MAGPIE, was released theatrically in the US and UK and is currently featured on Amazon Prime Movies. Marc has also developed projects for Film 4’s Frightfest, CBBC, E4 and BBC Three. Marc’s has co-created Dead Pixel Productions with producing partner Michelle Parkyn and in two years produced 5 feature films that have found distribution in the UK and US.

A BBC Casting Director for 15 years casting, Ben Cogan is no stranger to discovering new talent and helping many a new actor and filmmaker. Just a few  years ago Ben Cogan became freelance and has been busy casting a host of films and shorts including Trendy and Just Charlie since his departure. Prior to that, his extensive list of television casting included Doctors (345 episodes), Casualty (183 episodes), EastEnders, Holby City and Waking the Dead…plus a bunch more. And Ben is also a huge fan of helping and championing actor talent. 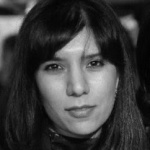 Rajita started work as a producer for National Geographic and Discovery in New York. She won more than 15 awards for the 2007 documentary 4 Kilometers which was shot with Bedouin Tribes in the unrecognized villages in Negev, Israel. Thereafter she worked with the UK Film Council Agency B3media as an in-house producer and produced several award-winning films which were screened at BFI London Film Festival, East End Film Festival, Palm Spring Festival, and Chicago Film Festival. Rajita produced the feature film Zohra directed by Cannes and Venice award-winning British director Barney Platts-Mills which enjoyed its World Premiere at the 40th International Rotterdam Film Festival. Her latest feature is Love Sarah, starring Rupert Penry-Jones, Celia Imrie, Shelley Conn, which has just enjoyed being released in cinemas around the globe, despite us having a pandemic in 2020. What an achievement.